ABOUT THE GRAIN DIVIDE FILM

The Grain Divide is a cinematic journey into the most debated food issues of our day. The film began as an unbiased, journalistic pursuit of real answers to growing concerns with modern wheat and grains. Theories suggesting the elimination of what has been our most basic food for thousands of years triggered a passionate curiosity and mission. The film originally began as a 22 minute short with the working title “Rise of the Grains”. It turned into what would become a feature length, 3 year project across 10 of the United States.

We believed that in order to change the world, you must first study it. At first, we set out to simply understand. In a “silver bullet solution” world where perception is reality, getting below the surface and looking at past, present and future was critical. As the answers became clear, we were determined to create a film that not only exposed the real problems, but focused on real solutions. The project became more than a film. It evolved into a mission for the future of food culture, true sustainability & human health.

Historically, grains have built civilizations, and to this day stand as our most basic staple food. Without a doubt, things have changed. These changes have led to a problem. A problem that is building toward a potential crisis. A number of theories have been tossed about the media. Some of these have turned into profitable books, diets, lifestyles and now an exploding gluten free industry. So who, or what is to blame?

After decades of focusing on yield, speed, shelf-life and consistency in an industrial grain system, our modern definition of grains, wheat, flour and bread have drastically changed. The critical elements of human health, taste and culture have taken a back seat to the industry’s targets. To a degree, this has been the case in most food categories, particularly since the green revolution. In the cases of those foods, the people have responded with an ever-growing “farm to table movement” featuring organic fruits and vegetables, grass fed beef, cage free chicken, wild fish & a focus on artisan, holistic, craft processes.

"THE FARM TO TABLE MOVEMENT FORGOT OUR MOST BASIC FOOD"

The Grain Divide features some of the world’s top chef’s, bakers and food thought leaders in their domain. We take you inside the farms, kitchens, bakeries and labs at the forefront of the rebuilding of the foundation of our food. The film is a compilation of their stories merged with history, science and the most basic, simplistic common sense. We firmly believe that chefs can save the world, but not alone. When it comes to grains, it takes a village and it all starts with a seed.

CREATED FOR A SPECIAL PREVIEW AT THE BREAD LAB

This extended preview video was created for a special preview event at the conclusion of the 2014 Grain Gathering in Mt Vernon Washington.

The WSU Bread Lab and Mt Vernon Research Center is one of the key locations featured throughout the film. Dr. Stephen Jones, baker Jonathan Bethony and WSU Grad Students Colin Curwin-McAdams and Bethany Econopouly play a key role in the sustainable, delicious, nutritious future of grains.

ABOUT THE BREAD LAB

The Farm at Agritopia

Sean Brock (Husk/Mind of a Chef) 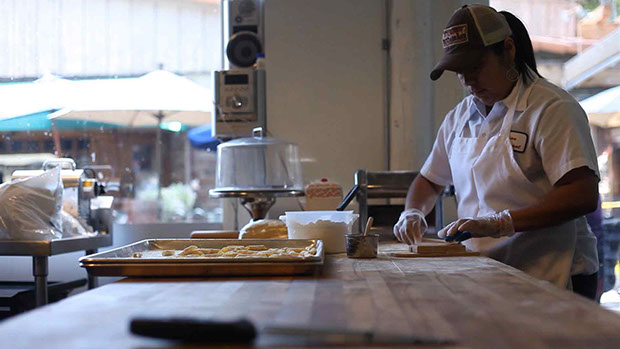 GET NEWS, BEHIND THE SCENES & MORE

To request information on Screening Packages, Events, or to arrange a Speaker, Panel Discussion or Special Experience at an event or venue, please send an email to:

To request a Press Kit, Official Screener or to request information, collaboration or interview for a media piece you are creating, please send a detailed email and contact information to:

For general information including sales, distribution, calendar of events, licensing, sponsorship, advocacy and any other inquiries or requests, please send an email to:

"THE SECRET OF CHANGE IS TO FOCUS ALL OF YOUR ENERGY,

NOT ON FIGHTING THE OLD, BUT ON BUILDING THE NEW"